I really wanted to evoke a sense of nostalgia and sadness of something that has done so much for its country being taken out of society after serving its purpose. And to help visualize the ship being slowly tugged down the river with all its significance, and the memories of its journeys and all the people that had served their country on her. Then when the piano comes in you can visualize the sadness of it slowly being dismantled with no care for what it has done for the people.

I first started to look at Romantic painters and came across this painting by J.M.W. Turner. 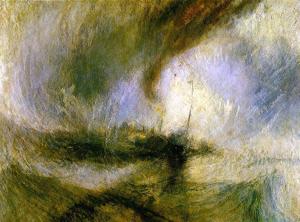 I really love Turners interpretation of the rough sea and rain. It shows a true perception of how powerful the natural elements can be and the unpredictability of the snow and water. A lot of painters had trouble depicting this, so when you see this very descriptive painting you can almost picture the sea being actually like this.

I began to write some music for this painting but felt it didn’t portray the same powerful  image mentally than the visual image itself. So I looked at some other Turner paintings and found his ‘The Fighting Temeraire‘ done in 1839. 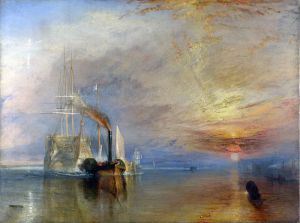 This second-rate naval ship was one of the last ever built and played a significant role in the Battle of Trafalgar in 1805. Here the HMS Termeraire is being towed to her final destination in Rotherhithe south east London, to be stripped and dismantled for scrap after performing its service for its country.  Turner, living by the river Thames, sketched many of the ships that sailed down the river and also witnessed the HMS Termeraire being towed towards the shipyard.

There was an error retrieving images from Instagram. An attempt will be remade in a few minutes.